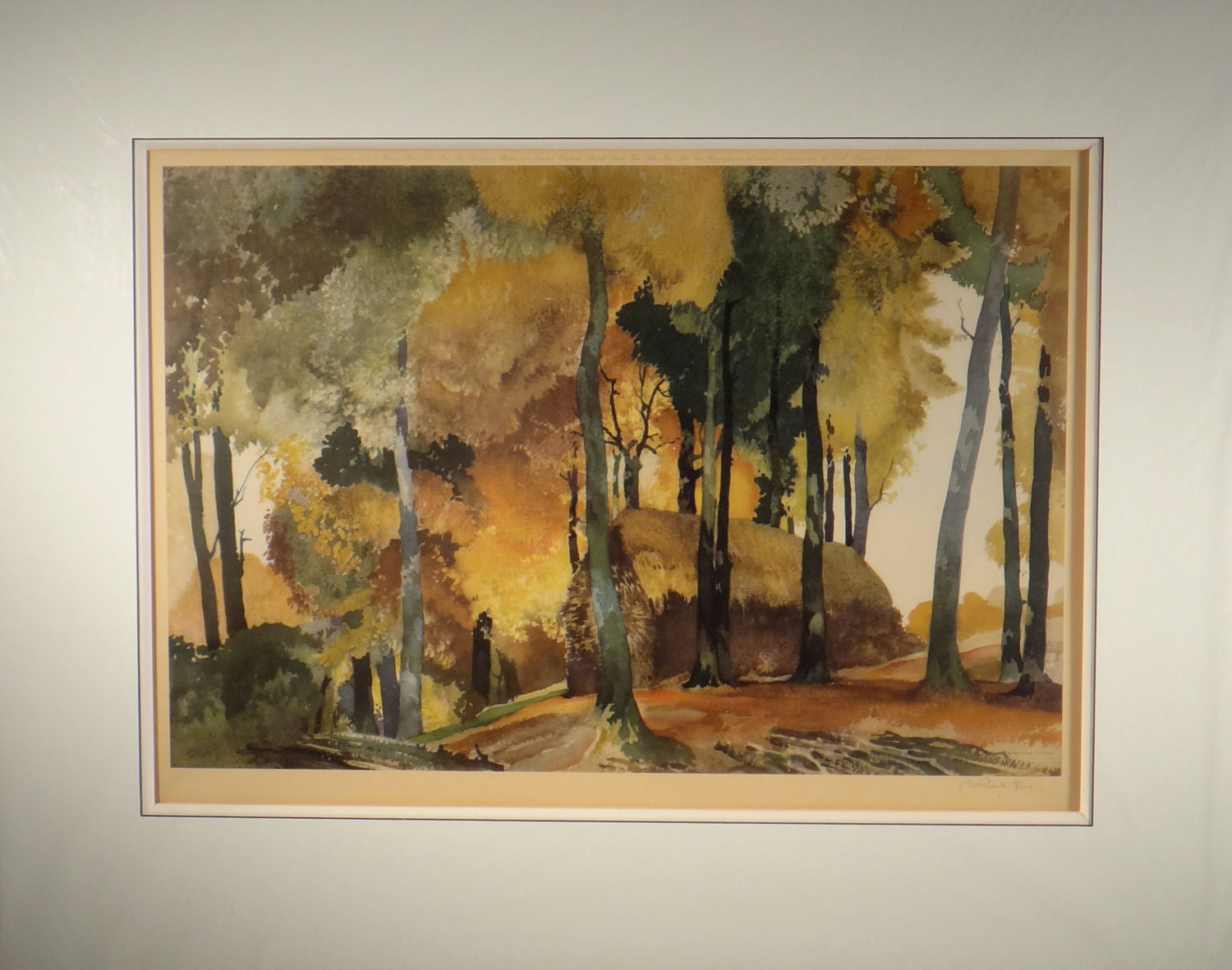 The Wood Rick
Signed, Limited edition of 325
Published 1942
Image Size 14.75" x 22". This study, totally untypical of the public's expectation of a Russell Flint is, from an academic point a fine example of his ability
to see the most simple subject and convert it into a powerful picture.


The scene is at Great Englebourne, three miles south west of Totnes in the Devon hills, where he spent much of his time during the early
part of the '39-'45 War.

There is still a wood pile on the spot today, albeit a somewhat depleted one, and it is also to be seen from a different angle
in the tempera painting "Great Englebourne" which appears in "More than shadows" as Plate 90. Incidentally Plate 122 in that book
shows the same covert from a different angle; the "dovecote" wall is the left hand gable end of the coach-house in Plate 90.

The Englebournes (O.E. English Stream) are a series of isolated farmsteads of Saxon origin of which the chief was Great Englebourne.
Even today the buildings attendant on the superb Georgian mansion, the old Linhay, the Shippens, the Coach-house, have about them much
of the time worn air of usage that he sought and found in France.

"... I found much to delight men in Devon" he wrote "but somehow I feel more interest in French agricultural scenes.
The timberwork there is usually more massive, buildings are often adapted, not built for their present purpose.
There is more than a hint of primitiveness in the tools and outfit."

Even so there is much about this corner of Devon to appeal to the lover of old France.
One has only to wander the winding flower decked lanes of medieval Totnes on a sunny summer evening to be back in Viviers or La Voulte.

For over 30 years the paintings and prints by Sir William Russell Flint have been our speciality
500 limited edition prints, personally signed and unsigned editions after his death; A wonderful collection original watercolour paintings and drawings, are also for sale.
In the heart of the French countryside, near the beautiful towns of Brantome and St. Jean du Cole lies La Chabroulie, Holiday house to let in Dordogne France.
Limited edition prints, in particular the signed, limited edition prints (ie. pre 1969) were in enormous demand at the date of publication,
the entire edition would often be sold out within several hours of the prints being released.
Unlike books, a 'second' edition of these prints is never produced, and apart from the original painting these prints are the only original hand signed, limited editions that have over the years become very collectable and sought after artworks, some of which are almost one hundred years old.

A master of watercolour painting, Sir William Russell Flint's work enjoys the recognition amongst the finest and most experienced art of our time.
Please see a collection of work by some of the world's finestartists:- widlife paintings of DavidShepherd. His signed prints
and paintings are a amazing portrayal not only of the animals he paints, but of the atmosphere and landscapes throughout the world. The work of one incredibly talented artist, who painted the working lives of everdayday people in the 1960s is now of the geatest importance to both art collectors and and financial investors. The signed prints and paintings of L.S.Lowry have been increasing in value on a regular basis and his work according to recent reports, is now more sought regarded of greater investment than many modern masters artists.