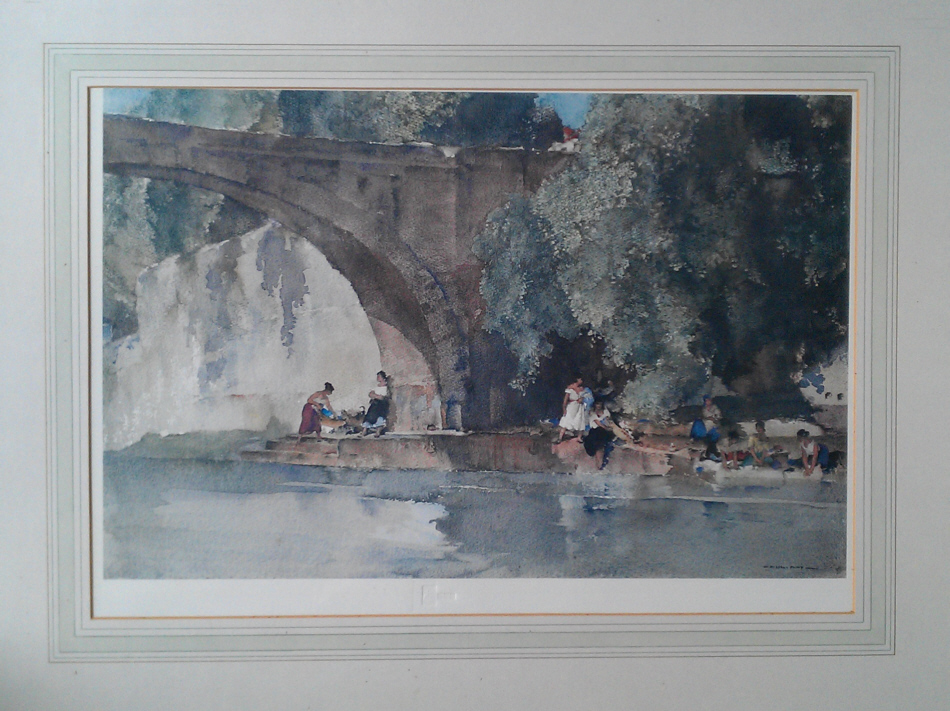 "The Bridge, Nerac"
A bridge over the River Baise, southwest of Agen, France
Some of Sir William's detractors complained that he always selected the most picturesque scenes.
Here however, he had chosen to show a modern piece of civil engineering, ignoring the really picturesque medieval stone bridge
a few hundred yards downstream.

In his later years, due to his artistic and financial success, Russell Flint was able to travel extensively across Europe, particularly in France
where he was a prolific painter, also enjoying some time painting in Switzerland, Spain, Italy, and Scotland.

Cornwater Fine Art has specialized in the paintings and prints of Sir William Russell Flint for over thirty years, and have on display over
500 edition prints, signed and unsigned; Also original watercolour paintings and red chalk drawings, for sale.
The limited edition prints, particularly the signed, limited edition prints (ie. pre 1969) were very sought after, and the entire edition could
be sold out within several hours of release.
There is no 'second' edition of these prints, these are the original signed, limited editions that have over the years become highly collectable and
sought after works of art, some of which are over seventy years old.

An part of France that Sir William spent so much of his time, was the Dordogne region in the south west.
If you would like to visit this area, we can recommend this holiday house to let, which can provide
a beautiful experience for those who enjoy the countryside and wish to visit the many towns and villages of great character. You may be also be interested to view two of our websites featuring the work of highly regarded wildlife artist, David Shepherd
and the signed prints and drawings of Britain's most sought after artworks by L.S. Lowry.